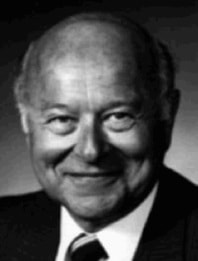 With deep sadness, we report that Henry Koffler died Saturday, March 10, 2018.
He was an extraordinary man who lived an extraordinary life.
He will be greatly missed by the many, many dear friends and family
all over the world whose lives he made better.
A celebration of his life will be announced at a later time; please check back here.

A Tribute to the Life of Dr. Henry Koffler

At the core, Henry loved being associated with gifted people, and developing and harnessing their collective talents toward significant discoveries, teaching, and service. He held uncompromisingly high standards and demonstrated throughout his life exceptional analytical capacities, whether directed toward science or the functioning of human organizations.

Two of the most remarkable hallmarks of his leadership were his ability to anticipate breakthrough areas of scholarship and research, and to recognize and persistently recruit promising talent. In his own words, “I led a charmed life in that I almost always had the opportunity to work in areas that I enjoyed and was able to attract the most capable colleagues I could find, more qualified than I was.”
Continuing on to University of Wisconsin, he received his M.S. in Bacteriology in 1944 and his Ph.D. in Bacteriology and Biochemistry in 1947, and was a Wisconsin Alumni Research Foundation Fellow from 1943-1947 and a National Research Council Fellow from 1946-1947.

From 1982–1991, Dr. Koffler served as President of the University of Arizona, and as President Emeritus thereafter. He also held professorships in Biochemistry, Molecular and Cellular Biology, and Microbiology and Immunology from 1982-1997, when in 1997 he became Professor Emeritus of Biochemistry. In 1985, he received one of the University’s Centennial Awards in 1985, a citation from the Arizona Board of Regents in 1991, the Regents’ Medal in 1991, and the Alumni Achievement Award in 2001, the Alumni Association’s highest honor.
Henry presided over the impressive success of the University, leading to its election into the highly selective Association of American Universities in 1985, and to the National Science Foundation’s rankings in 1991 as 20th in Research and Development among all (private and public) American institutions and 15th among public universities.

In 1985 he led the year-long Century II campaign of the University’s first fundraising campaign, greatly exceeding its original goal of $100 million with an achievement of $198 million. The events during this and the following year included the Festival in the Sun, an artistic and cultural celebration that set the standards for future presentations by what now is called UA Presents.

Henry regarded the Land-Grant College Act enacted during the Civil War and the G.I. Bill of Rights at the end of World War II as two of the cornerstones of our democracy, primarily by providing children from families with limited means access to public higher education. However, he believed that the Land-Grant College Act did not take full advantage of the synergy of which an innovative combination of teaching, research, and technology transfer could be capable, especially in the creation of new enterprises, restricting faculty members from establishing equity positions in for-profit businesses based on their university research and discoveries.

Henry began to address these challenges in 1986 with the establishment of the Office of Economic Development and the Office of Technology Transfer, and encouraging the University of Arizona Foundation to start the Arizona Technology Development Corporation (ATDC), the University’s first business incubator. To increase the involvement of the University in economic development, it was important to persuade the Legislature to pass legislation authorizing University employees to establish equity positions in enterprises developed from their discoveries. This was also accomplished in 1986.
Because of his interest in biology, chemistry, and undergraduate education, in 2000 the University named its new Chemistry/Biology undergraduate teaching building the Henry Koffler Building.
The acquisition of the IBM plant during the presidency of Dr. Manuel Pacheco as the University’s Science and Technology Park was another significant step forward in the efforts begun by Henry. Regent Donald Pitt and President Emeritus John Schaefer played key roles in this acquisition. Bruce Wright, Henry’s 1986 appointee to head the university’s participation in community and public service, including economic development, led the development and management of the Tech Park.
After he retired as President, Dr. Koffler continued to play a significant role in economic development, joining the Board of Directors of the Campus Research Corporation (CRC) and serving as chairman of the Arizona Center for Innovation Advisory Board, an important incubator that provides needed facilities, helpful connections, management advice, and experienced mentors to fledgling entrepreneurs. President Ann Weaver Hart’s effort to unify these endeavors under the Tech Launch Arizona program, directed by Vice-President David Allen, on whose Advisory Board Henry served until his death, promises to bring Henry’s decisions made in 1986 to fruition. He was especially proud of his contributions to the success of Ventana Medical Systems, a medical diagnostic company developed since 1985 by Professor of Pathology Thomas Grogan that was sold in 2008 to the pharmaceutical giant Roche for $3.4 billion.
Another major achievement during this tenure was the computerization of the campus. During his preliminary visits, he was surprised to learn that little had been computerized or modernized since he had been there as a student 39 years before. He assembled a task force, made sure a plan was put in place to make significant improvements to the areas of student data, administrative computing, overall information services, and computerization of the Library.

True to form, he assembled a task force as soon as he arrived in Tucson to analyze the current state and future directions needed, and a plan was set in place to make the necessary improvements over a period of several years. In addition to research computing, which was the furthest along at the time, significant needs were identified in the areas of student data, administrative computing, overall information services, and computerization of the Library. The first step was implementing the creation of the Center for Computing and Information Technology (CCIT, now UITS), which was basic to the computerization of the other services. Computerization of the Library was the last major phase in the project, which began with Henry’s appointment of Carla Stoffle as Dean of University Libraries in 1991.

His brilliant choice of Cedric Dempsey as Athletic Director (1983-1993), and appointments of great coaches such as Lute Olson (1983-2008) and Mike Candrea (recruited in 1986), led to the achievement of a broadly gauged and successful athletic program, with 19 UA students winning a total of 11 medals (three gold, five silver, and three bronze) in the 1984 and 1988 Olympics. Henry used to note jokingly that the fact that the Arizona football team remained undefeated by ASU during all nine years of his presidency spoke highly to his leadership.

Dr. Koffler served on the boards of the University Medical Corporation (whose creation he initiated), the Arizona State Board of Education, Arizona Town Hall, Tucson Tomorrow, Tucson Economic Development Council, Arizona Economic Council (which he helped found), Greater Tucson Economic Council (founding member), Tucson Technology Incubator, United Way of Tucson and Southern Arizona, the Mera Bank, the Arizona Executive Board of U.S. West Communications, Up With People, on the Advisory Council to the congressional Office of Technology Assessment, and as a long time board member and chairman of COPE, a mental health organization.

Throughout his career, he served as consultant to government, educational institutions, and industry, and on panels of the National Academy of Sciences, the National Institutes of Health, and the National Aeronautics and Space Administration. Among other public and professional offices, Henry served as founding Governor and founding Vice-Chairman of the American Academy of Microbiology; member of the governing boards of the Fermi National Accelerator Laboratory and the Argonne National Laboratory; and as a Director of Five Colleges, the pioneering consortium consisting of Amherst, Hampshire, Mount Holyoke, Smith Colleges, and the University of Massachusetts; and, separately, as a board member of Hampshire College.

Among the recognitions Henry received during his career and after his retirement include selection in 1951 as Fellow of the American Association for the Advancement of Science, receipt of the Eli Lilly Award in Bacteriology and Immunology awarded by the American Society of Microbiology in 1957, and honorary doctorates from Purdue University (D.Sc.) in 1977, and from the University of Arizona (D.Sc.) and Amherst College (LL.D.), both in 1981. In 1977 the French government inducted him as Chevalier (Knight) into the Ordre des Palmes Académiques (Order of Academic Palms), a national order of France for distinguished academics and figures in the world of culture and education.

In 1996, Purdue established the Henry Koffler Distinguished Professorship in Biological Sciences, and he was recognized in 1999 as one of Purdue's Great Teachers since the beginning of the institution. In 2000, the University of Arizona Foundation established the annual Henry and Phyllis P. Koffler Prizes for recognizing a member of the faculty or professional staff for distinguished service in research, teaching, or public service, and he was a member of its Leadership Council. The Arizona Townhall elected him to the Circle of Distinguished Service in 2002, the first year this award was given. On the 2008 Innovation Day, he received the University's Lifetime Achievement Award, and in 2013 was awarded the A.L. Slonaker Award from the Bobcats student leadership organization for his service to the University of Arizona. Henry was especially delighted when the UA Hispanic Alumni Club awarded him the newly created Portrait of Excellence Award in 2016 for his role in helping to establish the Hispanic Alumni Association.
His great joy in life and belief in the good of people; his friendliness; the dignity and respect with which he treated others; his brilliant mind; his integrity and gentle courage; his inherent ability to cherish the creative, the innovative, the beautiful, and the heartfelt; his impish sense of humor; his lifelong pursuit of discovery, science, and learning; his deep love for music and the arts; his ability to open his heart and share himself unselfishly; his concern for the young and needy; his persistence and hard work; the sheer goodness of who he was. This was a man who lived life fully, believing that what one contributes to society is what lives on. Farewell, dear friend. You will be missed more than you would have known.

A celebration of his life will be announced at a later time. Expressions of condolence may be sent to Phyllis Koffler at the Vivaldi Villas, 7700 S. Vivaldi Court, Tucson AZ 85747. The family requests no flowers. Donations can be made to the Henry and Phyllis Koffler Prize at the University of Arizona Foundation, to the Koffler Memorial at the Arizona Senior Academy at 13715 E Langtry Lane, Tucson, AZ 85747, or to the Humane Society of Southern Arizona in Henry Koffler's name.

The Arizona Senior Academy invites you to share your memories of Henry Koffler on their tribute page at http://henrykofflertribute.net/guestbook. 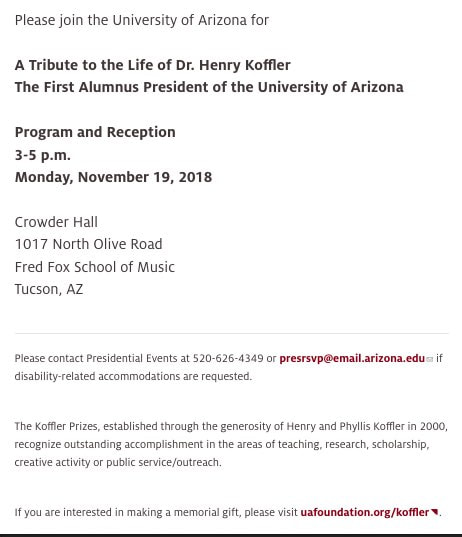